Don’t be intimidated by the long recipe involved in making these impressive mini chocolate bombes. Rather than one complicated recipe, it’s actually three simple recipes: mousse, chocolate brownies, and ganache. The components are then assembled to create restaurant-quality dome-shaped desserts, complete with Baci truffles inside and garnishing the tops. 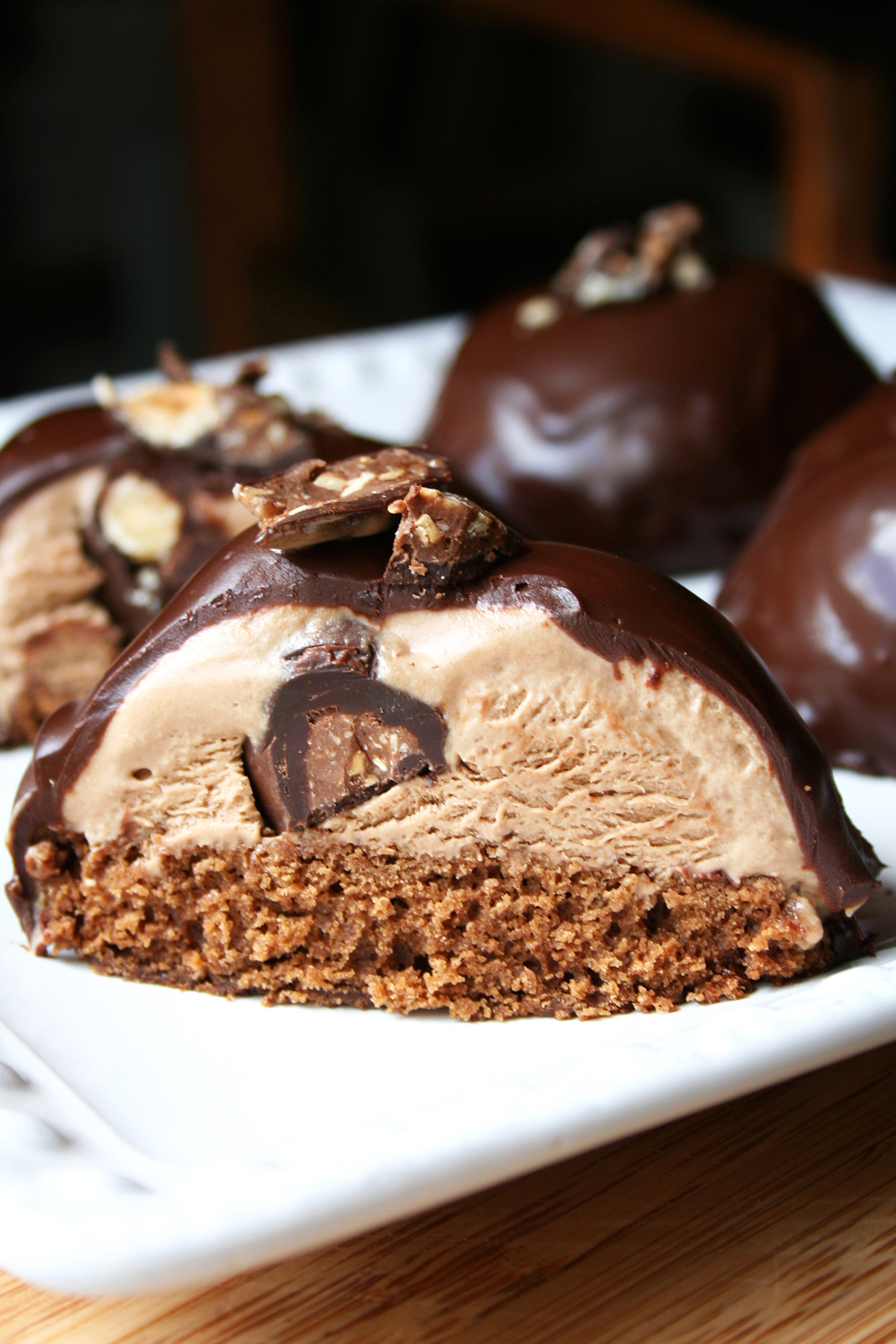 This part of the recipe can be made up to 2 days in advance; keep covered in plastic in the refrigerator until ready to use.

In a medium saucepan or the top of a double boiler, melt together the chocolate and olive oil over low heat.

Once melted, remove from heat and set to the side. If some slight separation occurs over the next few minutes as it slightly cools, that is ok.

In a stand mixer fitted with the whisk attachment, whip the egg whites and heavy cream together on medium-high speed until it forms soft peaks. Slowly add the sugar and continue to whip until the mixture attains firm peaks.

In a small bowl, combine the egg yolks, vanilla, and salt. Mix the egg yolk mixture into the chocolate mixture with a whisk. Mix until combined.

Fold the chocolate mixture into the whipped cream and egg white mixture, gently, until no streaks remain. Let the mousse chill in the refrigerator for at least 2 hours before proceeding.

Preheat the oven to 325 degrees F.

In a medium bowl, combine the oil, cocoa, sugar, eggs, and vanilla. Mix until well combined.

Add the flour and salt. Mix gently at this point, only until you see no more white streaks of flour.

Pour into your prepared pan, and bake for 30 minutes.

Remove from the oven, and let cool to room temperature. Invert the brownies on to a cutting board.

Place the chocolate in a large, heatproof bowl. Set to the side.

In a medium saucepan, heat the cream on medium-low heat until it comes to a simmer (but not quite a boil). Remove from heat, and pour directly over the chocolate. Whisk the mixture, first gently so that hot cream doesn’t spatter. You’ll see that gradually the chocolate will incorporate as it melts, and you can stir a bit more vigorously. Whisk until smooth. Set to the side; let the ganache cool for about 15 minutes before using to top your bombes, so it is still pourable but not so hot as to melt them.

Unwrap the Baci Perugina truffles. Coarsely chop one of them; leave the others intact. Set all of them to the side.

Cut your brownies into 4-inch circles. You can do this by placing your 4-inch bombe bowl on top of the brownies, and pressing lightly to indent the top of the brownies to give yourself a template to cut the perfect-sized circle. You will get 4 circles from an 8x8-inch batch of brownies.

Cut each of the brownie circles in half horizontally, as you would a bagel. Now, you have 8 brownie circles. Clean away any crumbs, and set to the side for the moment.

Grab your 8 four-inch diameter bombe bowls, and line each one with plastic wrap. Try to smooth as many wrinkles as you can.

Spoon 2 generous tablespoons of mousse into each cup. It should fill the cup about ⅔ full.

Press a Baci truffle into the center of each mousse cup, facing down (so that the top will be facing up when the bombes are flipped).

Place a cake round on top of the mousse and truffle on each cup, pressing down to make sure it forms a “seal” with the mousse.

Wrap the plastic around each unit, and place the bowls in the freezer to chill for 3 hours or overnight. You want the mousse to be rock-hard so that when you coat the bombes with ganache at a later point, they won’t begin to melt.

At the end of your chilling period, remove the bombes from the freezer one at a time to coat them with chocolate ganache. Invert and unmold the bombe, unwrapping it.

Use a spoon to drizzle the ganache on the bombe, using a smaller spoon or spatula to very carefully (the heat sensitive mousse makes them delicate!) smooth the sides if needed to ensure even coverage.

Garnish with a few pieces of the chopped Baci truffle.

Repeat with the remaining bombes.

Keep the bombes in the refrigerator until ready to serve. Get ready for lots and lots of compliments.